I remember not liking pea soup very much as a child. Maybe it was a texture thing. Maybe it was because we often had it during Lent. I guess for every French Canadian kid growing up in Manitoba, pea soup was almost a weekly thing, so it was very ordinary. But I know my mother made good pea soup because I tried it later in life and it was delicious. She had not changed the way she prepared it. And this was her recipe:

1. Place the hambone in a pot, fill pot about 3/4 full with water. Add peas and onion and barley. Bring to a boil and add bay leaves. Add carrot and celery and simmer until peas and barley are well cooked, about 2 hours.

I must admit I don’t quite get the addition of 1 cup pot barley. It does not add to the flavour, nor is it necessary as a thickening agent. Maybe she preferred the resulting texture. I would be inclined to omit it as I have never seen a recipe for pea soup with barley in it. But I suspect every French Canadian mother had her own way. Some even add a cup of diced potatoes to the recipe.

Madame Jéhane Benoît (1904-1987) is one good authority to consult in matters of French Canadian cuisine. Her La nouvelle encyclopédie de la cuisine contains traditional dishes as well as dishes from elsewhere. One of the recipes in her book is called Soupe aux pois classique, and here is her recipe.

1. Wash and drain the peas. Put them in a large casserole with all the ingredients. Bring to a boil and boil for 2 minutes. Remove from the heat and let it rest for 1 hour.

2. Return the casserole to heat and return to a boil. Reduce the heat and simmer, covered, for one hour or until the peas are cooked. Season with salt and pepper.

3. Serve as is, or purée in a blender before serving.

She then goes on to provide some variations, such as making a meatless soup for fasting days. Another variation has the addition of sliced sausages and cooked corn. Yet another adds cheese and crisp bacon. She also suggests that a tbsp of sour cream can be added to each bowl when serving. Finally, she writes that the American version of the classic pea soup uses a ham bone instead of the salt pork.

Mom always used a ham bone for her soup, and I have always done the same. I slowly simmer the ham bone and any meat on it for at least an hour, then refrigerate it until I need it. It will keep like this for abou

t a week or so. Another option is to simmer a smoked pork hock in several cups of water. The intensity of the stock increases as it simmers down. The idea of adding a handful of celery leaves is one I heartily subscribe to. Bay leaves are good. Savory is optional. Simmering a ham bone also flavours the stock with whatever spices were used to cook the ham.

Apparently the Pea Soup served on Canadian Pacific Railway passenger trains was really good. I have that recipe too. It is very similar to Madame Benoit’s, with the little flourish of crisping up some of the salt pork (leaner bits) and adding them at the very end. Here is that recipe.

1. Wash peas well in cold water. In a pot over medium heat, render some fat from the salt pork and sauté the carrot, onion, and celery until tender. Add hot water, slowly at first, the peas, bring all to a boil, and boil for 1 hour.

2. Remove pork and vegetables and continue boiling until peas are thoroughly cooked, adding water, if necessary, to bring to required consistency.

3. Wash salt pork, allow to cool, then dice small. In a small skillet over medium heat, slowly fry until crisp, drain all fat off, and serve in soup like croutons.

This is a very good recipe, actually. I highly recommend it.

The texture of a good pea soup is a matter of taste. I have never liked it too thick, so don’t always blend them. If it is too thick after cooking, you can add some more stock.  Taste it frequently.  Be sparing with the salt. Pepper is optional too.

When I traveled to Sweden in 1989, I was surprised to learn that Pea Soup is a traditional Thursday night supper in Sweden. Their version certainly reminded me of the French Canadian version, and I can only explain that by the fact that most French Canadians are descended from the Normans, who were Vikings from the Scandinavian countries. Then again, pea soup is such a universal thing, and such an ancient recipe, that the French Canadian version might have come from anywhere.

Pea soup is a very common food in northern countries. German armed forces started eating it during the Franco-Prussian War. It is also a common dish in the Netherlands. It is regular fare for Finnish and Scandinavian armed forces. Naturally, I sought out recipes for the Swedish pea soup and here is one recipe I found at:  (http://scandinavianfood.about.com/od/souprecipes/r/peasouprecipe.htm)

This is an immensely gratifying, warming soup traditionally made from dried yellow peas and served on Thursdays in Sweden, followed by crêpe-like pancakes with whipped cream and preserves (Pannkakkor) for dessert. Try swirling a teaspoon of grainy brown mustard on top of each serving to enhance both the presentation and the rich combination of flavors.

1. Rinse and pick through 1 lb. dried yellow or green peas. If using whole peas, soak the peas overnight in their soup water (this isn’t necessary if using split peas so long as you can let the soup simmer for 2 to 3 hours).

2. Fill a large pot with 8 cups of water (or 6 if you like a thicker soup. You can always thin it with water as you go along if it looks too dense). Add the peas, 2 finely chopped onions, 1 peeled whole onion studded with two whole cloves, 1 large chopped carrot, and a meaty ham bone (-or- 2 to 3 ham hocks). Bring to a boil, then cover pot and reduce to a simmer over low heat for 90 minutes.

3. If using whole peas, skim off any pea skins that have risen to the surface. Remove 2 to 3 cups of the soup, puree in a blender or food processor, and return puree to the pot (this helps to thicken the soup). Continue to simmer for at least 30 more minutes; another hour or more won’t hurt it.

4. Minutes before serving, remove the studded onion and the meat. Chop the meat (it should amount to about 1 cup) and return to pot. Season the soup with 1 tsp. dried thyme, 1 tsp. ground ginger, 1 tsp. salt, and 1/8 tsp. pepper. Simmer 15 more minutes.  Serve, passing around grainy brown mustard to stir into soup to taste. 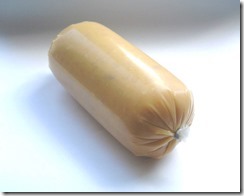 Many variations can be found for that recipe too. Sometimes the pork (or sausage) is served on the side with mustard, and a hearty rye bread. Herbs may vary too. In my cookbook library I have a number of Scandinavian cookbooks, and each one offers a variation. Apparently, in Sweden and Denmark, you can buy pea soup in a tube. I cannot vouch for its flavour.

Curiously, in France, you are more likely to be served Potage Saint-Germain, which is made with fresh green peas. It is quite different, but delicious. I make this one at the time of the year when we can get fresh peas at market. In Italy, they have a Minestra di Piselli. These are very fine soups, and in a very different league than the split-pea soup variations discussed here.

This is a very brief essay on my experience with pea soup. There are thousands of variations, but one thing is for sure, this is comfort food of the highest order, tempered perhaps by memories of boarding school and other cafeteria-like offerings which pale in comparison to the real thing.