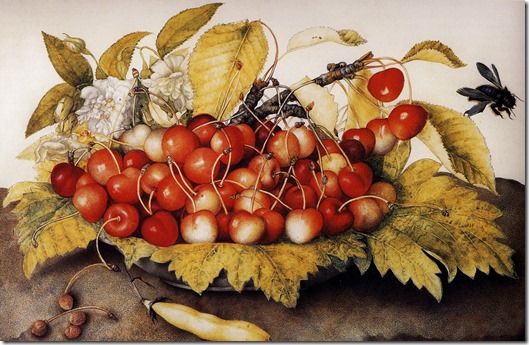 The cherries on the trees were just beginning to turn pink, when I first thought it was time to turn to this blog again. Seemed like a productive thing to do while I recovered from knee surgery at home. In an earlier blog this year [18  January 2015] I mentioned the marvellous late Renaissance Italian painter, Giovanna Garzoni, who specialized in still life paintings and miniatures. She is almost unknown even though she has been the subject of a couple of exhibitions and one modest book. Still life painters rarely get included in the canon of great artists, let alone female artists who worked with still life. All the more reason to celebrate them here!

I begin with Giovanna Garzoni because she was one of the earliest. In her case, still life painting comes out of natural history illustration, such as botanical art and scientific illustration. This was, after all, the late Renaissance where the study of the natural world through direct observation was an intellectual pursuit. This was also an age of inquiry where some effort was made to represent the natural world as realistically as possible. The aristocracy of the day who were the artist’s patrons had a considerable interest in the natural world, as they designed and constructed their gardens, importing plants from far off places and exotic lands.

Apparently her first commissioned work (from a pharmacist) was a Herbarium when she was 16 years of age. A fairly early marriage ended in an annulment as it seems Giovanna had already made a vow of chastity. As she had no man to support her and she did not join a religious order, she was totally dependent on aristocratic patronage, and this she seems to have been able to secure throughout her life. The appeal of her work on parchment using opaque watercolours (gouache) and the intimate nature of her small scale works found support, and these works even in reproduction provide an indication of her achievement. 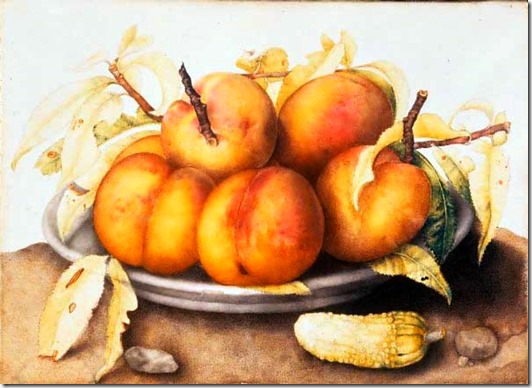 The colour of the peaches is most lovingly rendered. The cucumber looks a bit strange, but may be a variety foreign to North American markets. The leaves show signs of insect damage. 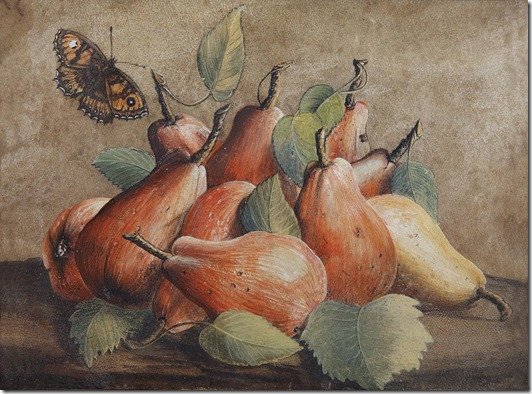 Apparently an earlier work by the artist, the pears seem a bit artificial, while the butterfly is possibly pinned to the wall rather than in flight. One characteristic of a Garzoni still life is the tight grouping of the fruit on a table or in a bowl, along with the leaves of the tree fruit. The inclusion of the leaves may be a characteristic of botanical illustration. 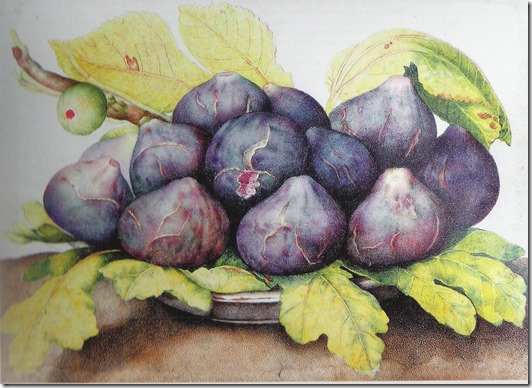 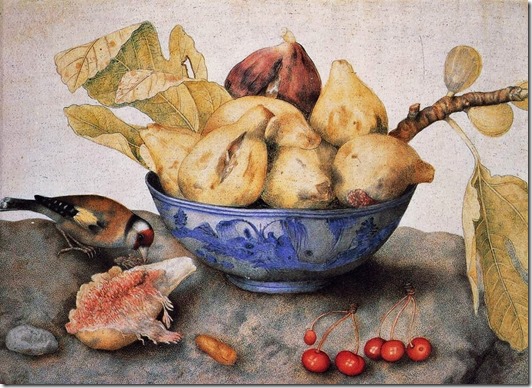 A number of works feature figs, and others contain birds pecking at the fruit. The figs are in an imported blue and white Chinese bowl, no doubt owned by her aristocratic patrons. The figs are literally bursting in their ripeness. 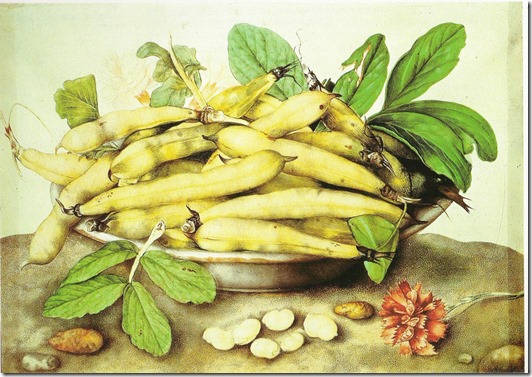 Almost bursting out of their pods, these beans are shown in a simple earthenware dish, with a worn rim, along with some beans, leaves, and some carnations. 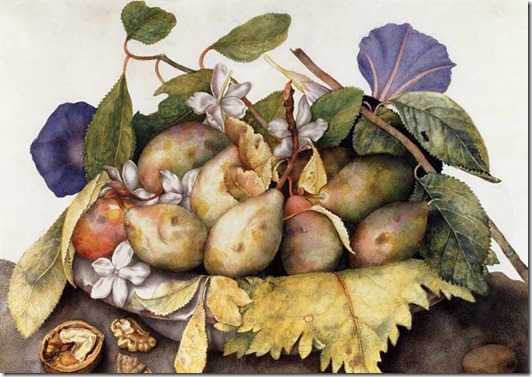 Apparently plums, although they look like some type of small pear to me.  White jasmine flowers are also included. The bluish flowers seem to be some type of Morning Glory. A cracked walnut is also offered. 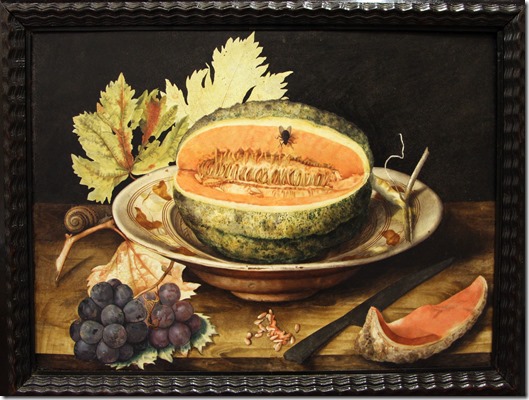 A melon is presented on an old earthenware plate, along with a knife that has been used to cut a wedge from it. Melon seeds also appear, as well as grapes. A very realistic fly on the melon demonstrates the painter’s skill at verisimilitude. A snail appears on a a stem as well. In many ways, such still life painting may evoke the story of the ancient Greek painter Zeuxis whose painting of grapes was so realistic that birds flew down to peck at them.

Giovanna Garzoni lived and worked in a time when still life painting was just coming to the fore, although it was always considered a minor branch of painting.  The 17th century also produced brilliant still life painters in the Netherlands, and many are far better known that Garzoni.  But there is a quiet charm to her small-scale work which is often not present in the work of her Dutch contemporaries who seem to revel in displays of virtuosity.

I have always loved still life painting and sought it out in galleries and museums I have visited through the years. I will return to the subject of still-life painting in further posts.

A slide show of Giovanna Garzoni’s work can be seen on YouTube, unfortunately without details. Some of the pictures also lack clarity, but it is still worth viewing.