I was reading an article by Peter Hellman on Snooth this morning in which he suggests that a quiet environment, away from all distractions, especially related to connectivity, allows for a greater appreciation of wine. I believe that, and while snow covers the ground here in Summerland, one’s tendency is to cocoon a bit, and concentrate on some of life’s simple pleasures.

Many years ago, I bought a little cookbook entitled Florentines, by Lorenza de Medici. It has always been a delight, especially because of the reproductions of paintings by Giovanna Garzoni (1600-1670). In her preface, Lorenza de’Medici also makes reference to a manuscript by Giacomo Castelvetro (1546-1616) titled (in translation) as The Fruits, Herbs and Vegetables of Italy (1614). Castelvetro wrote the manuscript as an exile in Great Britain and was lamenting the preponderance of meat in the British diet, and remembering nostalgically the marvelous produce of his native country. 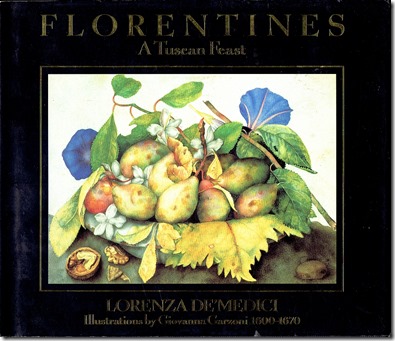 Some of the recipes in the book may seem a bit odd to us today, but I did try one out a few days ago and the result was terrific. This was a salad of cucumbers with a walnut dressing. Here is the recipe, as appears in the book:

1. Peel the cucumber and slice it thinly. Place in a salad bowl.

2. Soak the breadcrumbs in water; then squeeze them  dry and place in a mortar or food processor, together with the garlic and walnuts.  Pound or blend until smooth, if necessary adding a little water to make a homogenous cream. Dilute with the vinegar and oil and add salt and pepper to taste.

3. Pour the sauce over the cucumber and serve.

A few comments are in order. I used a single long English cucumber in this recipe with excellent results.  One could use small field cucumbers, seeds removed, or even the mini cucumbers that are now available.  The recipe would probably be quite good with an Armenian cucumber was well.

Cucumbers today may be quite different from what was available during the Renaissance.  Castelvetro says about cucumbers that

“because of their coldness, we eat them with onions and pepper, or serve them with gooseberries or verjuice. We never use the large yellow ones in salads, as the English do, but only the small completely green cucumbers.  We make another dish with the big ones, which is very good; we cut them in half lengthwise and hollow out the soft part inside. Then fill them with  a stuffing of finely chopped herbs, breadcrumbs, an egg, grated cheese and oil or butter, all mixed together, then roast them on a grid, or cook them gently in an earthenware pot or a tinned copper dish with a lid. You could add pepper or strong spices.”

Of walnuts, he writes:

“We also have walnuts , which are common everywhere. The green ones start to be good about the feast of San Lorenzo [10 August], and  are highly esteemed and eaten by the gentry, who consider the dry ones to be on the whole more coarse than genteel.”

He goes on to say that in Lombardy, the coarser walnuts are made into an oil which the poor folk use for lighting.

As for Giovanna Garzoni, here is her Bowl of Peaches with a Cucumber, a watercolour.

There is quiet simplicity in most of Garzoni’s little paintings. The one above celebrates summer fruits and vegetable, while the one on the cover of Florentines – a Tuscan Feast is her Bowl of Plums and Walnuts with Jasmine Flowers. I will discuss Giovanna Garzoni’s paintings in a future post, and deal more generally with the subject of still-life.